When I got my first aquarium - I thought it was going to be so easy.  Because that's what the guy at Petco said.  I very quickly learned there was a LOT more to this hobby than I realized, and started reading everything I could find on the topic.  With so many different types of tropical fish, with many different needs, it's very difficult to sift through all of the information to find the stuff you need. This guide to tropical fish aquariums should arm you with the knowledge you need to make responsible educated decisions when setting up your first fish tank.  Another great way to find valuable information about tropical fish is to join an aquarium forum.

Types of Aquariums
One of the first things you need to determine, is what type of fish tank you want.  Some of the most common aquarium types are: 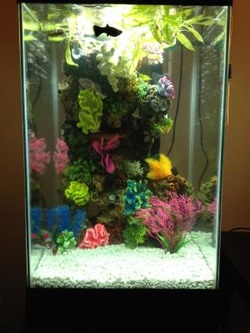 Freshwater Community Aquarium
A freshwater community tank is pretty much exactly what it sounds like - a freshwater fish tank with a whole community of different types of fish living together.  A nice community aquarium is a stunning vision.  Careful preparation and research will allow you to create a beautiful tank with a variety of colors and fish swimming in every part of the tank.  The biggest challenge with a community aquarium, is selecting the right types of fish that will leave together peacefully.  Certain fish are very territorial and will attack other fish of the same type, and sometimes other fish that are just a similar color.  You also want to make sure you choose different fish that prefer to spend their time in each of the 3 distinct regions of the water column: top, middle and bottom.  For example - zebra danios love swimming near the surface of the water, tiger barbs love the middle of the tank, and rafael catfish love the bottom of the tank.  Using these 3 fish together means you now have activity in every part of the tank, all the time.

Freshwater Species Only Tank
This is the exact opposite of a community tank - instead of having a variety of fish living together, you keep just one type of fish in the tank.  While that may sound boring, some of the most beautiful and natural looking aquariums I have ever seen were species only.  After learning they are the only type of fish around, most will be more adventurous and spend more time swimming around.  Another big benefit is not having to worry about breed compatibility issues.

Freshwater Planed Tank
This is definitely not for a beginner.  In addition to keeping everything just right for the fish, you also must maintain the perfect conditions for plants to grow as well.  You also need to do a lot of reading about planted aquarium lights, fertilizer, co2, etc.  A heavily planted freshwater aquarium can be very beautiful and rewarding, but it comes at the cost of increased difficulty, time and money.

Goldfish Aquarium
The biggest difference with a goldfish aquarium, is the temperature of the water.  Goldfish prefer a much cooler temperature than tropical fish, so most goldfish aquariums do not have heater.   I'm sure you've seen the fish bowls they sell for keeping goldfish.  This is absolutely not sufficient - they are far too small and will lead to an unhealthy, unhappy goldfish.  Make sure you research the type of goldfish you will be getting, and find out exactly how much space they need so you can choose an appropriate sized aquarium.

Betta Fish Aquarium
Betta fish, and other anabantoid (or labrynth fish) gave a complex labrynth organ that allows them to take a deep breath of air from the surface of the water, and store oxygen for an extended period of time.  This allows them to live in an aquarium without oxygenation.   That is why you see bettas sold in tiny little cups.  Remember - just because they can survive in a tiny cup, does not mean they can thrive in a tiny cup.  Simply put - a betta needs at least 2 gallons to himself in my opinion.

Saltwater FOWLR Tank
FOWLR is an acronym for "Fish Only With Live Rock", which describes the setup being used.  Live rock is old dead corals that are now home to millions of beneficial bacteria that clean the water, and thus is an important part of any saltwater aquarium.  A FOWLR tank is a saltwater aquarium that only contains live rock and fish - none of the other invertebrates such as starfish, crabs, corals, etc.

Tropical Reef Aquarium
This is certainly one of the most challenging aquarium setups, but can also be one of the most beautiful.  The variety of colors, textures, patterns and movements seen in various reef inhabitants is something you cannot find anywhere else in the world.  A reef setup is much more expensive than a FOWLR tank, because you need very high powered lights to "feed" the reef inhabitants such as coral.  The light actually feeds bacteria that lives inside the coral caled Zooxanthella.  This bacteria in turn feeds the coral.  In addition, other expensive equipment such as a protein skimmer are needed to keep the water clean enough for the sensitive reef creatures.

Saltwater Planted Tanks
There are many different beautiful and interesting plants living in the ocean, and many of them will live happily and healthy in a proper aquarium environment.  Some people go for the reef plants, where some prefer the sea grasses, which provide a completely unique look.

Brackish Aquarium
A brackish tank is one that is not fully saltwater - it's a mix of saltwater and freshwater, and thus is a home to completely different species than either a freshwater or saltwater aquarium.  Some of the most common brackish fish are black molly, green spotted puffer, figure 8 puffer, several goby varieties and archerfish, though there are others as well.

Hopefully this article will give you a better idea of what options you have as far as deciding what type of aquarium you want to maintain.  This will give you a great starting point for finding the information you need on what type of equipment and fish will work best.  I will be adding a lot more information on all of this and much more to help you through the entire journey of setting up and maintaining your new tropical fish aquarium.